An excellent choice for remote control of the rotator is using an ARS-USB Unit connected to a Raspberry Pi (Aka RsPi). In this way, you do not need a computer 24 hours on.

There is plenty of information on the Internet about the Raspberry Pi, therefore, the scope of this section will not go beyond basic operation and wiring of the RsPi.

Note: RsPi is a minicomputer that runs on Linux.

The ARS-USB plugs into one of the USB ports on the RsPi (any of them). Automatically ARS-USB is detected as a serial port, that Linux is known as a <em>tty</em> port. An available serial port will be presented as ttyACM0.

If there is other serial port present it will be called ttyACM1 (or ttyACM2 and so on).

Linux, unlike Windows, doesn’t need any driver, and immediately recognizes the ARS-USB as a serial port.

Since we want to access the ARS-USB from TCP/IP (either the local network or Internet), we have to install and configure a program that allows us to precisely map a TCP/IP port to this serial port (ttyACMx) where the ARS-USB is connected.

This program is called: ser2net and does just what we need.

Now you edit the configuration of the service, which will be in the directory:

Go to the end of the file, remove the examples that come by default and type the following line:

In this example, the RsPi listens on port 6000 and sends the traffic to the serial port ttyACM0. If the ARS-USB is in a different port, replace ttyACM0 with the correct port.

To automatically start the service, you must type:

Now all connections to this port will be routed to ARS-USB. All that needs to be done now is to configure ARSVCOM as a Remote Rotor and configure the remote IP and Port used in RsPi. 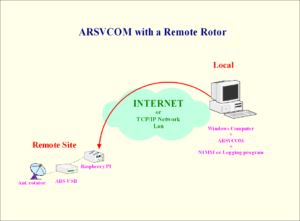 The RSPI + ARS-USB combo is an elegant and inexpensive solution for antenna rotor control in Remote Stations.

The RsPi is a gateway between TCP/IP and the serial port on the ARS-USB, but can also perform other tasks simultaneously, such as control of a weather station, APRS server, etc…