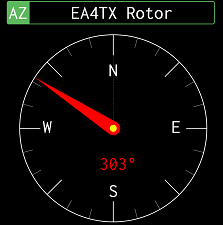 My friend Tobi DH1TW has developed a new web control of the ARS-USB through a simple and effective web interface. He has used one of the most innovative programming languages known as GO (see golang) developed by Google in 2009.

One of the many advantages of this programming language is that it allows generating code for multiple platforms (GNU / Linux, FreeBSD, Mac OS X or Windows), which means that you only have to maintain a single source code.

It can be downloaded from the Tobi DH1TW page:

the source code and the binaries already prepared for the different platforms.

The remoteRotator program in addition to providing a simple and dynamic web interface for the control of the ARS, provides access to the traditional program for managing the ARS: ARSVCOM, so that several ARSVCOM clients and web users can be simultaneously connected.